Behaviorism: Is punishment or reward more effective in education?

Every person involved in teaching and learning has a philosophy on how people learn. Implicitly, explicitly, legitimate or not this mental construct of learning affects the way they impart instruction and assess learning. One of the oldest and most
commonly used educational theory of learning is
behaviorism.

This theory, differentiated from cognitivism, constructivism, and others, was extensively studied by psychologists Jason B. Watson, Edward Thorndike, B.F. Skinner. Behaviorism has been applied not only in education, but also in business, parenting, politics, and psychological therapy to name a few. Its initial subjects were animals as explored by Ivan Pavlov, who studied classical conditioning, and his famous studies on dogs (Pavlov’s dogs) and Thorndike who studied operant conditioning in cats. Soon after its intricacies were described, this theory was applied to the field of education.

The learning process, in general, is quite a challenge to describe let alone define. Some view it as an all-or-none phenomenon, while others view it as a continuum process. In behaviorism, learning is seen as a change in behavior due to an external stimulus. Behaviorist, such as B.F. Skinner, do not take into account mental models as it is more difficult to assess or control. This might be a bigger challenge in competency-based education as some of what’s being assessed in this setting are based mental models that may differ from person to person. While behaviors might seem clear-cut in behaviorism, assessing if something has been learned or not presents a difficult endeavor to non-behaviorists educators.

Behaviorism operates under the assumption that organisms will increase or decrease their behaviors if adding pleasant or taking away noxious stimuli, coined as
The Law of Effect by Edward Thorndike. The type of stimulus found in behaviorism can be controlled, as seen on studies conducted by Skinner on experimental animals in cages. The Wikipedia diagram below depicts the difference between reinforcement and punishment as employed in a behaviorist’s learning environment. 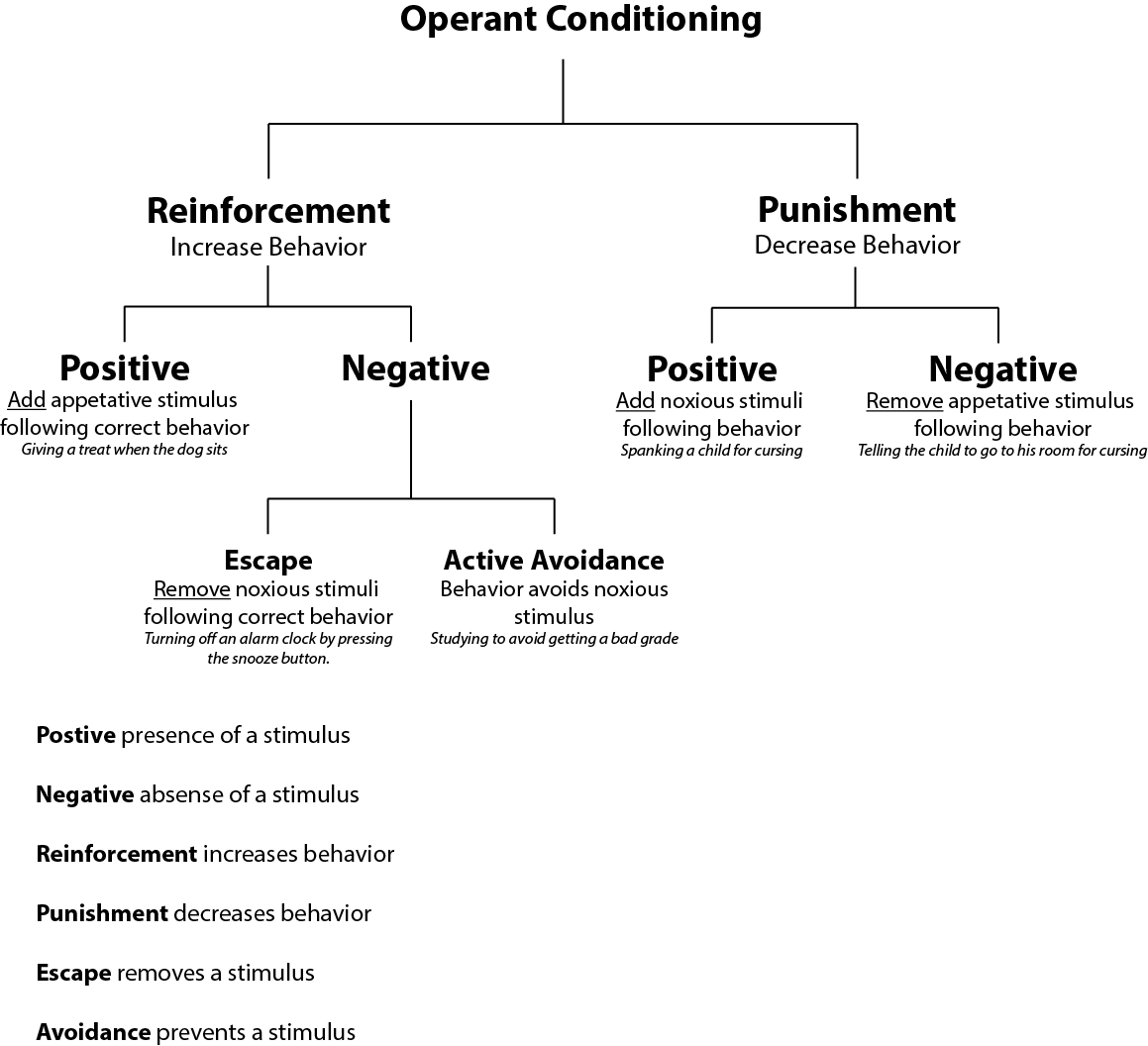 In his experiments Skinner had hungry rats in a box and gave food pellet (positive reinforcement) each time the rat pressed on the lever. The assumption in this case is that food will increase the probability that the behavior (pressing the lever) will increase due to the positive reinforcement. In another experiment a satiated rat was placed in a different box and was given electric shocks until the rat pressed the lever. The reinforcement in this case (withdrawing the electric shock) increases the probability that the rat will press the lever (behavior). The experiment can be seen in this 1948 recording.

Skinner’s view of behaviorism in education

Although Skinner was a pioneer and viewed behaviorism as an educational theory, he was not in favor of how it was applied in the school system during his time. His criticisms alluded to the fact that the school environment was riddled with aversive control rather than positive reinforcement. His belief was that positive reinforcement was much more effective in developing the student’s behavior for lifelong learning. Here’s a quote from an interview with Richard Evans in 1964:

“Aversive techniques are immediate, they work when you have one person stronger than another… This is an easy thing to account for because the results are immediate. The results of positive reinforcement are often deferred and it’s very hard. It’s
often true in education, the teacher wants the student to be quiet and study can threaten him and get that result. But of course the student only studies under that pressure and once you release it he’ll never study again. But if you can induce him
to study for other reasons, which is much more difficult and requires a much better understanding of human behavior you have a permanent result because you’ll be using consequences which continue in his life as he goes on in the world.”

Derek Muller (@veritasium), a physics educator recorded a video “Is punishment or reward more effective” which quotes a study performed by Daniel Kahneman, where flight instructors were under the impression that by giving negative feedback, in the form of punishment, the fighter pilots would perform better while positive feedback would do otherwise. After a statistical analysis was performed via regression analysis it was found that the punishment had no effect on their performance.

Praise the behavior, not the person

Interestingly a Wall Street Journal article, based on a book, appeared last year where a music teacher was praised for teaching strategies in the classroom which seemed closer to aversive control and punishment rather than positive reinforcement. In the article the teacher is quoted as calling the students “idiots” and saying “Who eez deaf in first violins?”. The article goes on to say that he corrected students’ behaviors by poking them in the hands and arms with a pencil.

Although, some teachers identify with the philosophy of being “tough teachers” there are others who think otherwise. In an article in Education Week Teacher, a music teacher and author Nancy Flanagan cites the work of Carol Dweck to illustrate her theory of growth and fixed mindset. Dweck studied this phenomenon in adults and children, and found that when learners are praised for their learning process, it fostered a “growth mindset” as opposed to praising the person which fostered a “fixed mindset”.

In related findings, a video by Dylan Wiliam, an educator and researcher who studied formative assessment, discussed that when feedback is task-involving rather than ego-involving, students showed more effective improvement. On the other hand ego-involving feedback was not as useful.

Dr. Brent Thoma (@Brent_Thoma) and ALiEM Book Club recently reviewed the book “Drive” by Daniel Pink (@DanielPink) which focuses on motivation. The book is based on Self Determination Theory, a theory developed by Edward Deci and Richard Ryan. This theory states that the learner needs a sense of mastery, autonomy, and purpose for intrinsic motivation. The contrast between SDT and behaviorism is that intrinsic motivation is not taken into account in behaviorism, as stated by Richard Ryan in this video of his keynote lecture at the 5th Conference on Self-Determination Theory. There are important interactions between motivation and feedback which need to be considered seriously when helping learners develop into lifelong learners.

More worrisome is a learning culture based on aversive control that’s conducive to a high-shame, low-participation environment (video by Frank Coffield).
I think it is important to consider the work of Skinner and his views on behaviorism, if employing a punishment/reward system. Furthermore, the new work by the authors cited above should also be taken into account for the benefit of learners and teachers. Positive reinforcement in the form of task-involving feedback seems
to be more effective than aversive control in driving students’ motivation and promoting lifelong learning.

Can this positive reinforcement also be misused?! You get a star for getting to the end!!!

What are your thoughts?

The post Behaviorism: Is punishment or reward more effective in education? appeared first on ALiEM.