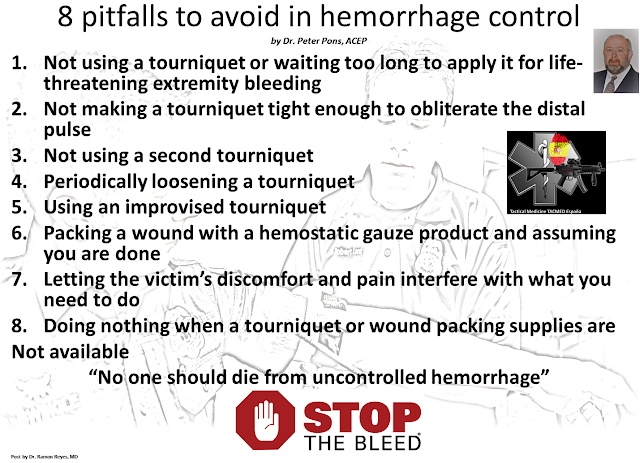 PAGINA FCEBOOK
https://www.facebook.com/TACMEDEspana/
TACMED Spain Medicina Tactica España  GRUPO  https://www.facebook.com/groups/311284402300505/
BY PETER T. PONS MD FACEP ON SEPTEMBER 8, 2017
Original post
Stop the Bleed, the national campaign initiated by the White House in response to the many recent active shooter incidents in the U.S., has garnered significant attention and support over the past two years. Active shooter situations, coupled with research that has come out of the conflicts in Iraq and Afghanistan, have helped us clarify that the greatest cause of preventable death after trauma is uncontrolled hemorrhage, whether internal or external. In the treatment of myocardial infarction, it has long been said that “time is muscle.” Similarly in trauma, we now have a greater understanding that time is red blood cells and every RBC counts toward the ultimate survival of the trauma patient.
As a direct result of this realization, several neglected hemorrhage control techniques have become major components of civilian medical educational programs designed to train citizen responders, public safety personnel and medical care providers of all levels. These include techniques that were once performed only within the confines of the OR — such as packing a bleeding blood vessel — and interventions that were long frowned upon — namely, tourniquet application.
While these hemorrhage control techniques are not particularly difficult to learn and master, there are a number of pitfalls related to performing these interventions that can negatively affect the ultimate outcome of the trauma victim.
Todos Nuestros VIDEOS en YouTubehttps://www.youtube.com/channel/UCUlA5YN77sXVlW7UtqokDrw?view_as=subscriber

1. Not using a tourniquet or waiting too long to apply it for life-threatening extremity bleeding

For many decades the traditional teaching has been that the application of a tourniquet was the procedure of last choice when it came to controlling bleeding from an arm or a leg. Only if all other hemorrhage control efforts failed was a tourniquet to be considered. Even then, it was used with great reluctance and caution out of concern for causing the subsequent amputation of the injured limb.
The experience gained over the past 15 years of combat has clearly demonstrated that recommended, commercially available tourniquets can, in fact, be used safely. Data from the U.S. military have shown that survival for trauma victims who have a tourniquet applied before they bleed into shock is 9 times greater than for victims who receive a tourniquet after they go into shock. In addition, the data show that tourniquets can be safely applied to an extremity for a period of up to 2 hours with no concern about amputation. In fact, there have been no amputations in the U.S. military as a direct result of tourniquet application in patients with an application time of 2 hours or less.
This time period falls well within the timeframe of care of most trauma patients treated in urban and suburban areas of the U.S. That means trained individuals should no longer have any hesitation to apply a tourniquet to an extremity for life-threatening external hemorrhage. The tourniquet should no longer be the last choice for hemorrhage control — it should be the first choice.

2. Not making a tourniquet tight enough to obliterate the distal pulse

Whenever a tourniquet is applied to an extremity for hemorrhage control, it should be made tight enough to completely obliterate the distal pulse. This is to ensure that no blood is getting past the tourniquet and into the extremity.
There are two important reasons for this. First, if blood is able to get beyond the tourniquet, the patient will continue to bleed, thus defeating the purpose of applying it in the first place. Second, if the tourniquet is not tight enough to act as an obstruction to arterial blood in-flow, it will more than likely serve as an obstruction to venous outflow. This increases the likelihood of developing compartment syndrome in the extremity, potentially resulting in muscle and nerve damage.

3. Not using a second tourniquet

In the majority of cases, the application of a single tourniquet will control the hemorrhage. There are instances, however, when one tourniquet has been placed and tightened as much as possible but it is still inadequate to control the bleeding. These situations typically occur when the wound is located on the lower extremity and the tourniquet has been applied to the thigh.
Experience shows that a single tourniquet may not be able to control hemorrhage — or obliterate the distal pulse — in trauma victims with large, very muscular thighs or those who are obese. In these cases, there should be no hesitation to apply a second tourniquet. Place the second tourniquet directly above and adjacent to the first tourniquet and tighten it as necessary until the bleeding stops.

For many decades, first aid classes taught that whenever a tourniquet was applied to an extremity, the tourniquet should be loosened every 15 to 20 minutes to allow blood to return into the arm or leg. The thinking was that by allowing blood to re-enter the extremity, fresh oxygen would be supplied to the extremity, making it better able to tolerate the tourniquet and thus survive longer. However, as one might guess, the result of loosening a tourniquet is that the victim begins to bleed again.
Early in the war in Iraq and Afghanistan, the U.S. military recommended the practice of periodic loosening. But after nearly causing the death of several soldiers from gradual exsanguination, the military changed its practice. The current recommendation is that once a tourniquet is applied and tightened, it should not be loosened or removed until the source of the hemorrhage can be controlled by some other means.

When a commercial tourniquet is not available, many individuals will attempt to fashion an improvised tourniquet using whatever materials are at hand. These often include materials such as belts, string, rope or shoelaces. The fact is that improvised tourniquets too often fail to accomplish the desired goal of hemorrhage control or lead to secondary complications.
For example, using a leather belt as a tourniquet is usually unsuccessful because the leather is too rigid and cannot be adequately twisted and tightened to stop the bleeding. String, rope and shoelaces can often be made tight enough to stop bleeding, but they are usually quite thin and narrow. All of the compression is applied to such a small area that they commonly result in damage to underlying structures such as nerves. Lastly, many improvised tourniquets cannot be tightened enough to obstruct arterial blood flow and only serve as venous tourniquets (see number 2 above).
The traditional teaching on constructing an improvised tourniquet was to roll or fold a cravat (or other fairly pliable material) to a width of approximately 2 inches and to tighten it with some sort of windlass. Most commercially available tourniquet products, particularly those recommended by the U.S. military, are at least 1.5 inches in width (or wider) and include the windlass. Wide tourniquets are better tolerated by the victim and less likely to cause damage to underlying structures.
In reality, improvising a tourniquet takes knowledge of the proper procedure and practice to accomplish in a timely fashion. If you are not practiced in improvising a tourniquet or there are no proper materials at hand, my recommendation is to apply direct pressure using your hands (see number 8 below).

6. Packing a wound with a hemostatic gauze product and assuming you are done

Hemostatic gauze is a commercially available product, usually comprised of a gauze roll that has been impregnated with a compound such as kaolin or chitosan. When packing a wound with one of these products, there are a number of important points to remember.

7. Letting the victim’s discomfort and pain interfere with what you need to do

It should come as no surprise that all of these hemorrhage control interventions — tourniquet application, wound packing and direct pressure — increase the patient’s discomfort and cause significant pain. Recent military reports tell of soldiers who have lost most of a leg to an explosion and had a tourniquet applied to what remained of the extremity. These soldiers often report greater pain from the tourniquet than from the amputation itself.
A patient’s pain and discomfort should not dissuade you from doing what is necessary to control his or her bleeding. Tell the patient that you know what you are about to do will cause them pain, but it is necessary to stop the bleeding and save them from exsanguination. Provide analgesia as soon as is practicable given the situation.

8. Doing nothing when a tourniquet or wound packing supplies are not available

What do you do when hemorrhage control supplies are not available or have been used on another victim? The lack of a tourniquet or hemostatic gauze should not stop the effort to control bleeding. Even without any equipment, hemorrhage can often be controlled and stopped.
Direct pressure on a wound using two hands and body weight is an effective method of slowing bleeding or stopping it altogether. The downside, if you can call it that, is that this method of hemorrhage control takes time to be effective. In many cases, it will take 10 or more minutes of continuous pressure to stem the blood flow and form an adequate clot at the bleeding point. Most importantly, there should be no release of the pressure during this time to see whether it is being effective. Letting up on the pressure will let the hemorrhage begin anew and undo any benefit obtained up to that point.
If hemostatic gauze is not available, wound packing can still be accomplished using either plain gauze or any clean cloth. Both are equally effective as hemostatic gauze. The primary difference is time. Unlike with hemostatic gauze (which must be applied with direct pressure for a minimum of 3 minutes), wounds packed with plain gauze or cloth require pressure to be maintained for a longer period of time.

No one should die from uncontrolled hemorrhage 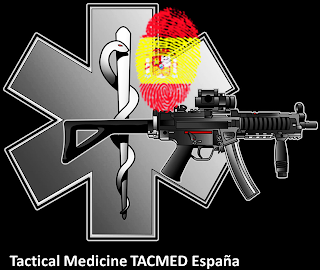