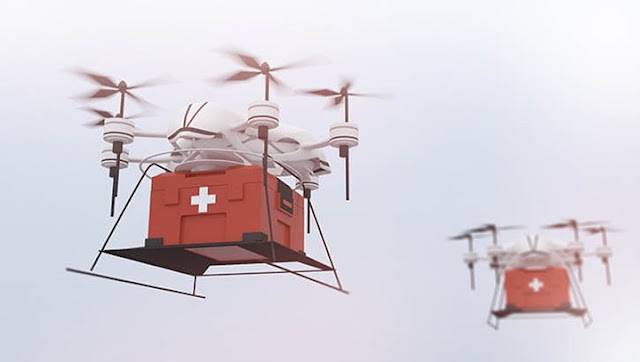 Drones carrying fresh blood products to wounded troops on the front lines may be critical for military medicine in a conflict against a "near-peer" adversary. (Photo: Shutterstock)

Blood loss or “bleeding out” is the leading cause of preventable death on the battlefield, military health experts say.

So one of the best ways to save lives during combat operations is to provide blood products to forward deployed medics and corpsmen as soon as possible.

During the wars in Iraq and Afghanistan, getting the needed blood products to injured warfighters was typically not a major challenge when the U.S. military controlled the skies and maintained a nearby network of medical facilities.

“We were pretty reliant on medevac 'dust off' to deliver our blood,” said Air Force Col. (Dr.) Stacy Shackelford, chief of the Joint Trauma System.

However, in future conflicts against a “near-peer” adversary, Shackelford said, that could be far more difficult. Injured troops may have to remain at the frontlines for days while needing blood transfusions or other major medical care.

The solution: Drones may become essential to combat medicine.

“I think it's going to come down to drone delivery of blood by some type of unmanned vehicle that can fly in and drop off more blood or more bullets, whatever is needed,” Shackelford said.

“We think that drone resupply of blood and immediate-need medical products are really just around the corner,” said Dr. Adam Meledeo, a research scientist for coagulation and blood research at the U.S. Army Institute of Surgical Research, Fort Sam Houston, San Antonio, Texas.

“There are multiple off-the-shelf solutions that are being considered,” and DHA is funding a number of other innovations to optimize the ability to provide drones in the battle space, Meledeo said.

Yet using drones to resupply blood and other medical supplies will be challenging.

“There’s obviously trade-offs between some of these different platforms, such as making sure that we have a vehicle that's fast, and somewhat stealthy…and has a very large battery that will be able to keep it airborne for a much longer period of time if it needs to loiter somewhere in anticipation of there being a problem,” Meledeo said.

“There's also been some talk of outfitting some of our combat hardware drones that are already in use with alternative payloads that would be able to supply blood, medical supplies and really just about anything, such as MRE’s, ammunition, and water” to frontline medics or service members caring for wounded soldiers, he explained.

“The primary issue with blood resupply is that it has to be maintained at specific temperatures, as do a number of pharmaceuticals including certain pain medications, and antibiotics,” Meledeo said.

“The biggest technological hurdles right now are being able to maintain those temperatures inside those drone payloads very consistently, at a variety of altitudes, and a variety of different ambient conditions for potentially lengthy periods of time, without drawing too much power away from the system itself.”

The Marines Corps used drones for resupply during an exercise in Australia. Drones have also been used in Rwanda and Uganda to transport medical supplies to rural areas across mountain ranges and in bad weather, Meledeo said.

“I think that we're going to get there much faster than we had initially anticipated,” he said.

The use of drones for future near-peer conflicts is starting to filter down into the operational forces as a potential solution in the near term, he noted.

“In the long term, there are a number of lines of effort, such as involving drones for the extraction of patients,” Meledeo said.

U.S. partner countries are examining some of these platforms that can evacuate a patient rapidly without risking other personnel in potentially contested airspace, he added.

How does one transport casualties stealthily?

“Part of it is marking the vehicles appropriately with standard medical nomenclature. That gives you the Geneva Convention protection. But, obviously, we go up against certain enemies that will not care about that at all,” he explained.

Stealth technology continues to improve. When it comes to drones, “it may be just a matter of keeping the drones low to the ground, and that they're being piloted by an artificial intelligence system,” Meledeo explained.

“So, hopefully, AI will be faster to react than a human would be. But even still, I think there are a lot of concerns about” the use of drones to extract wounded warfighters.

“The long-term goal…is to actually have some sort of robotics onboard these drones that would be doing medical care to the patient during transport,” he said.

One example is smart tourniquets that will be able to detect whether they need to be released. Other automatically guided solutions include IV placement or catheter placement, Meledeo said.

“At least on a rudimentary level, the community is already pursuing a lot of automated solutions or artificial intelligence-derived solutions for automation of different medical processes.”

This research is underway but there’s no timeline on this concept.

“Hopefully, we'll be able to get some confident results from some of these different technologies that are going to be packaged together in this system and enable the drones to then not only resupply at the point of injury, but also actually take care of the transportation and the management of patients during that transportation.”

Drones have been used to successfully bring an AED in cardiac arrests. This is transforming prehospital medicine. https://lnkd.in/ezr2edmz